I recently found today’s soup within the blog archives whose notes included the recipe, photos, and exclamations like ‘really delicious’ and ‘everyone really loved this!’

The Sea Bass, Garden Potatoes and Leek Soup is a lovely simple soup, sort of a chowder and sort of a fish stew which easily utilizes the shells from the included shrimp to produce a rich flavored stock as its base.

With leek lending subtle flavor to the mixture the potato cubes cooked in the shrimp stock absorb a rich flavor complementing between ingredients while adding a touch of thickening. Today’s catch of the day features sea bass but any firm flesh fish such as cod may be substituted making Sea Bass, Garden Potatoes and Leek Soup flexible whichever way you choose to float your net.

Along with the developed complex flavors which are very simply attained between the vegetables, shrimp stock and the assorted fish mix then later combined with the creamy half and half this simple soup, sort of a chowder and sort of a fish stew may well leave you happily smitten hook, line, and sinker. 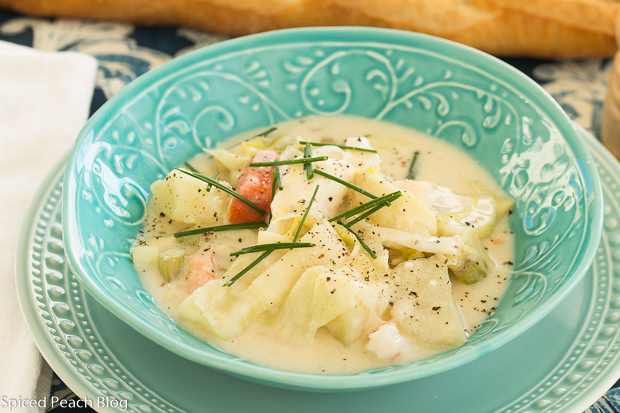