I’ve read many recipes that include a number of spices in Masala omelet but I did not experience anything similar to that in Kerala India last summer. Another friend from Mangalore concurs this as true in her region as well. Among the places we stayed, which hosted mainly people from India, the limited omelet spices I observed in the morning omelet preparation only included perhaps a bit of ground coriander, maybe a touch of red chili powder, salt, and pepper.

Fresh hot chilie peppers however, either greens and reds, oftentimes both, were always included, along with fresh chopped bell peppers, red onion, and chopped tomatoes with the seeds removed. Unlike the brunch omelet in the United States, patrons do not stroll through the omelet preparation line picking and choosing among various ingredients. Omelets are prepared with the same ingredients depending on the individual restaurant in Kerala and everyone receives the same omelet.

The Kerala cuisine is noted for its common use of coconut oil and thus foods are predominantly prepared using coconut oil, including the daily Masala omelet.

A small amount of chopped fresh cilantro lightly speckled the omelets in the cooking preparation, with the finishing touch some lovely scented fresh bunched stems. Any place you flip it, a little spice and lots of colorful fresh veg and hot peppers is a delicious, flavorful way to begin the day. 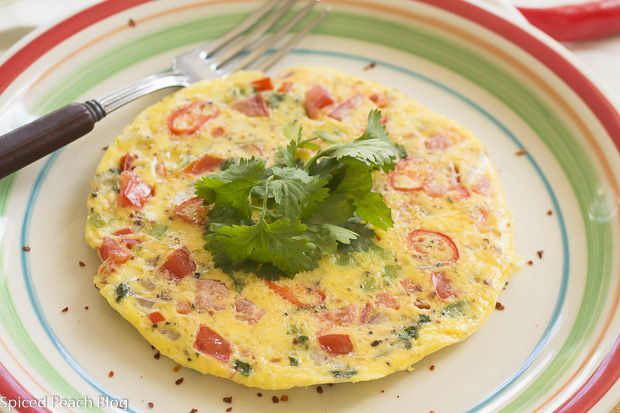