If you frequent Korean or international markets you might notice beautiful bunches of Korean watercress stacked along a bin section in various seasons throughout the year. Lightly spraying water mists on the produce shoot from above enable small droplets to form giving the appearance of a fresh green bouquet. Korean Watercress is so pretty in its peak fresh state that it is tempting to stack a bunch into a vase.

But alas, this bitter green preparation requires a quick forty-five-second blanch in salted boiling water for its preparation. And then to maintain its bright dark green color once drained, it is immediately then either shocked in ice water or gently rinsed in very cold water. If you are lucky, sometimes this seasoned Korean Watercress is served as part of the small side dish banchan at Korean restaurants. The first time I ever had it I thought it was seaweed, but the vegetable has its own distinct taste, a clean, fresh flavor. The vegetable would be considered a bitter green but I would not describe it as being too bitter following the blanching process.

Korean Watercress is often dressed with a bit of sesame oil then topped with a touch of sesame seeds, perhaps some red pepper flakes. It can also be enjoyed mixing a bit of sugar with soy sauce until dissolved then blending the combination with sesame oil before dressing.

Easy to prepare in less than ten minutes, Korean Watercress provides an excellent and unique vegetable variation to add to the seasonal repertoire. If you end up thinking its as pretty as I do, just remember to take it out of the vase in its best peak of freshness and cook it. 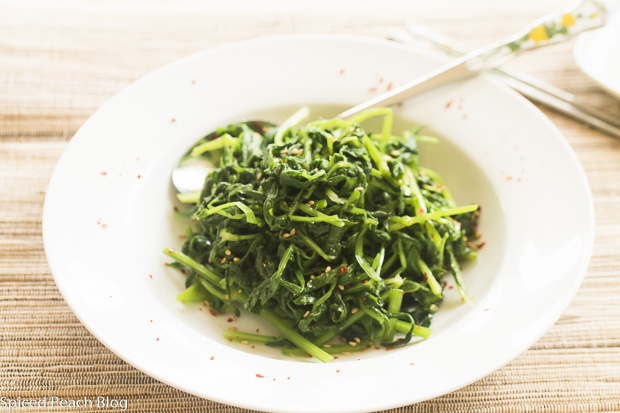