By Peggy Gilbey McMackin | Published: May 4, 2017
Jump to recipe

A variety of cold noodle dishes may be found in many Korean family kitchens throughout the hot summer months and one popular favorite is Korean Cold Buckwheat Noodles Salad.

I’ve prepared various versions of this dish at home over the years and also as part of my semester long Korean Cuisine class at Drexel University a couple seasons back. What made today’s dish extra special was cooking together with my dear longtime friend, Anne. Also joining us was Anne’s elegant Mom, Kang, Chong Suk, visiting from Texas who for each time we’ve been together in the course of twenty-three years has continually been “happy to meet me.”

The only way to describe Anne, besides her beauty, talent, intelligence, and a very generous big heart is that she’s one of those special besties that shares with you all life’s notable moments, celebrations, success, happiness, and any disappointments and rough times in between.

Along with hot tea and small bites of French pastries, we three enjoyed lots of animated conversation, laughs, and plenty of fussing over shapes and color arrangements in coordinating the cold buckwheat noodle dish while dual designing this food segment for our local Blue Bell’s Finest Magazine and today’s post.

Easy to prepare, today’s cooked, icy cold buckwheat noodles, also known as soba noodles, are simply topped with a variety of fresh vegetables and sliced hardboiled eggs. Accompanying the platter arrangement is a fresh orange scented Soy Sesame Sauce which is served on the side and tossed individually between bowls. Providing a clean sweet and salty flavor the combination is pleasing to the palate especially on those days when dinner preparations don’t require you to turn on the oven.

Visual appearance is important in Korean Cuisine so the vegetable colors were coordinated with a certain balance in mind along with paying attention to the details of evenly sized and shaped components in the display. Korean Cold Buckwheat Noodles Salad is flexible in the broad variety of ingredients that may be included in the preparation. Salad accompaniments often vary by the home cook topping the dish with ingredient staples on hand in the household pantry and may also include leftover marinated beef, chicken, pork, or fish cut into small pieces. Korean Cold Buckwheat Noodle Salad also makes a stunning display for the buffet table or a Pot Luck.

One special tip in the preparation is cooking the buckwheat/soba noodles until just done to the bite. Because the noodles are very starchy many cooks will add a cup of cold water into the boiling noodles early on in their cooking which also helps keep the starchy liquid from boiling over. The noodles need to be drained immediately and rinsed under very cold water until completely cool. Some cooks will then tumble the noodles into ice water before draining again and chilling. I simply toss the noodles in a long dish with a bit of canola oil once they’ve been rinsed well with plenty of very cold water, cover, and chill until assembly. 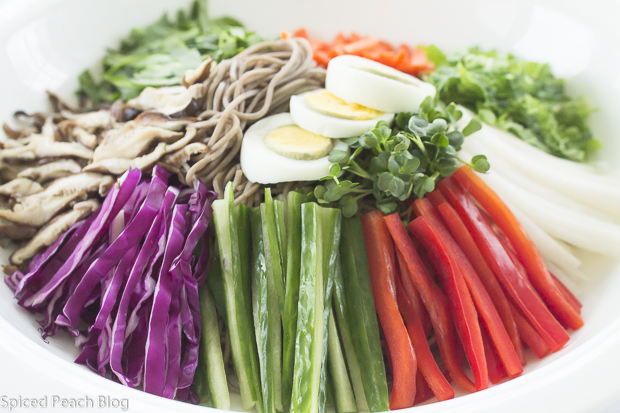 Buckwheat (soba) Noodles may be purchased at any Korean or international market.