Ham and Cabbage. It may be my most curious immigrant recipe of past. Or maybe not. Ham and cabbage may also be one of those that they call non-recipe recipes. I mean what’s to it besides essential simmering? You can even cook the potatoes in the same pot as the ham and cabbage. The only reason I steam the potatoes separately in this dish is that I’m not so fond of overcooked mushy potatoes.

I prepared this post for St. Patrick’s Day because Ham and Cabbage was a common St. Patrick’s Day dish in my family when I was younger. I’m not sure the common Irish salmon staple was even invented in America yet. And when I was growing up, the then younger World War II veterans like my Uncle Mike refused the mere suggestion of lamb.

And then, and this is where my cultural ancestry puzzle with St. Patrick’s Day food begins, it surrounds the Corned Beef. Hm.

I’m finally admitting it. I never heard of Corned Beef being served on St. Patrick’s Day until adulthood. Really.

Corned Beef in my family was one thing: a Corned Beef Special. What you got at the Jewish Deli after Sunday mass. Thinly sliced and thickly stacked Corn Beef on Rye with cheese, Russian Dressing, and Jewish pickles on the side. My Grandmother from Ireland on my father’s side owned and ran the butcher/grocery shop beneath their family home in Philadelphia. I can only assume this provided easy access to a juicy ham butt or two or three or more with 6 kids plus any hungry neighbor kids and others. She kindly and generously fed many and frequently, including during the depression. This is among the few certainties shared by lots of others over the years of which I know and hold dear.

So Ham and Cabbage is kind of like my own version of eating moussaka when the other kids were eating their peanut butter and jelly sandwiches for lunch.

Either way, Ham and Cabbage is as easy to prepare as it gets with its own nutritional benefits and now  whenever I prepare it, around St. Patrick’s Day or otherwise, I cannot help but wonder on its tradition in my own family and how and if and why it somehow fits into my own Irish family immigrant recipe of the past. 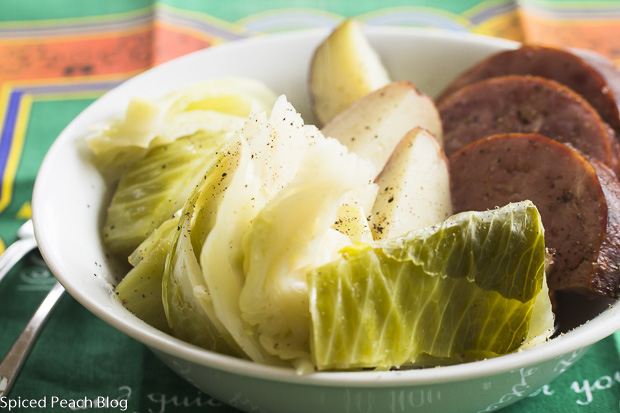 Remaining broth from ham and cabbage may be strained and used as soup broth.