Creamy Mixed Onions Gratin pares well as a hearty fall and winter dish and also makes a great side on the holiday table.

I once read a sentiment comparing the scent of an onion cooking in a home as a sign of love, the idea that someone cared enough to cook a special meal for sharing. If you concur on that aromatic comparison, then imagine the wafting aromas of three different types of onions, a leek, and two cloves of garlic while cooking. Heavenly love. Having planned to share this dish sometime in the fall, I fortunately happened upon it scrolling through recipe posts. The photo styling with the pumpkins and fall scenery in the background sort of determined post now or otherwise wait for a whole other year. I decided to post now. You can easily use just one type of onion following the recipe proportion. Creamy Mixed Onions Gratin  yields enough for a bit more than a medium-sized serving spoon per diner which technically is about as much as most folks can fit onto their plates with all the other mains and sides set abundantly on a holiday table. 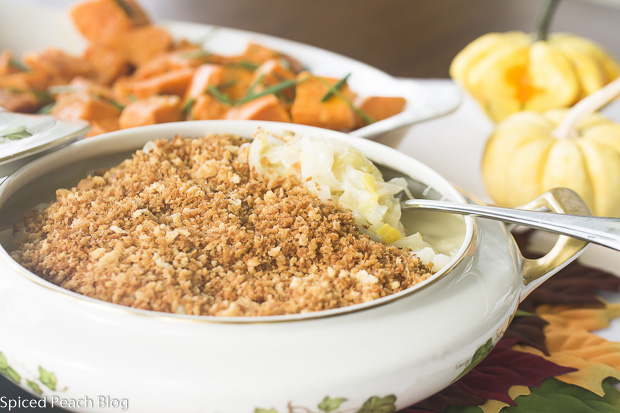