By Peggy Gilbey McMackin | Published: May 6, 2019
Jump to recipe This Borscht with Beef is one healthy meal in a bowl.

And this lovely colored Borscht with Beef certainly, or most likely, contains enough nutrients to sustain one for a week. Perhaps its preparation was meant to do so in Eastern European times past. I formulated this recipe some months back after getting together with Kim on a possible business collaborative. Kim owns the Acupuncture business where before my move from Blue Bell was located relatively a couple towns over from me in the Village of Skippack.

Conversation with Kim later evolved into Borscht. Beef Borscht. The Eastern European version that filled the steaming soup pots prepared by Kim’s mother and grandmother consisted of small amounts of cubed beef and besides beets, a broad array of healthy vegetables, including cabbage. Kim insists on using all organic ingredients in the soup preparation. Kim didn’t have her family recipe on hand at our first meeting though she enthusiastically and vividly described the ingredient list and her vision on the importance of this one pot specialty in her family’s history.

Having naively always been under the impression that Borscht strictly included the deep reddish purple brothy liquid the Ukrainian women used to make in my childhood topped off with a dollop of sour cream, perhaps a sprig of dill, I was completely fascinated with the addition of all the vegetables and most surprising, the inclusion of beef which perhaps given its past historical place provided the needed protein for families filling up on this nutritious bounty any time of the year. The color of any Borscht reminds me of being in grade school art with the magical transforming color burst and in this case, a blending between the beets and the tomatoes. Ever so lovely.

In the timing of photographing this hearty soup I realized I had run out of sour cream, and the fresh dill earlier purchased wasn’t looking quite as perky as a few days prior but please give it a go if you choose. On the other hand, Kim’s Borscht with Beef packs the most delicious, healthy flavor just on its own. A taste from ancestors past reminiscent of Eastern Europe, a history of Kim’s own family. 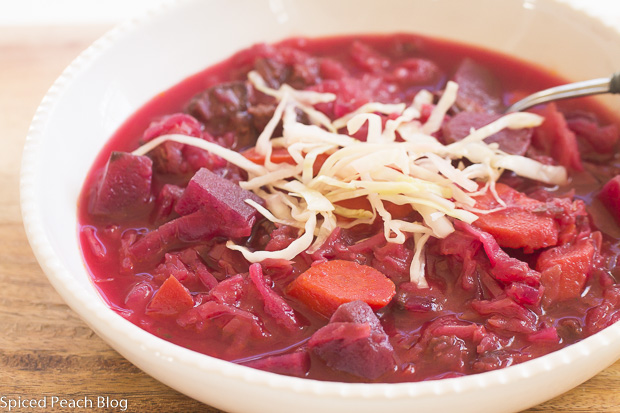