A culture of ancestors past, a paternal grandmother with high caliber culinary skills, and a traditional dish of simplicity each provide an ingredient in the recipe for Armenian Rice Pilaf, a dish of Easter Tradition for Agnes Fuller.

Growing up in a home with an Armenian father and an Italian mother, Agnes always considered her childhood as typical American. Similar as many American families, the roots of extended cultural traditions on both sides of Agnes’s family were mostly passed along through food, including Armenian Rice Pilaf. (I’ll share the Armenian style dyed Easter Eggs also shown above later this week.) The place of Armenia is known in history as the first Christian country, and its foods, including Pilaf, are similar to those of the Middle East.

With strong Catholic faith and tradition, Agnes’s grandmother and then her daughter, Agnes’s Aunt, actively cooked full spreads of traditional foods for the Armenian community at their parish church following weekly mass. Being a successful executive at the top radio station in the Philadelphia market doesn’t provide Agnes with a lot of free time for cooking. There are still a few dishes among those cultural traditions learned through her grandmother that Agnes cherishes in preparing well, if not to perfection, and Armenian Rice Pilaf is among her top favorites.

They say that food conjures memories of the heart and in Agnes’s case, the cultural past of the pilaf has ignited a richer depth of the recipe in a more spiritual way, through prayer. Working out the recipe particulars for later sharing with you had only one catch, exacting the timing. Sensing my curiosity on the clock, Agnes shared with me her prayerful process of this simple yet timeless cultural preparation.

She said, ‘You know I don’t actually time the pilaf when I prepare it at home. Instead, I say the prayers of my childhood, and as I finish each set, I know the pilaf is ready for the next step. The prayers make me pause about my family roots while bringing forth tradition in my own family, those generations I now feed and with prayerful hope that they too will be nourished in happiness and peace.’

May your recipes in this Holy Week be filled with loving preparations and prayer. 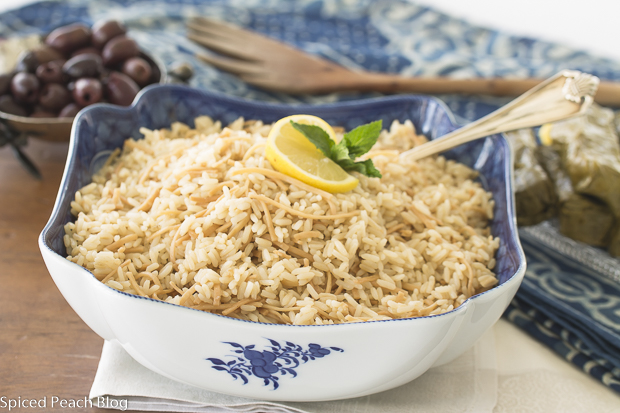