After nearly two weeks of three curry meals a day in Kerala, India (more about that at a later date,) I’m craving some lighter style fare and this simple combination of 3 Farmers Market Veg with Orange Sesame Dressing fits the bill. The same as lots of folks, I tend to arrive at Farmer’s Markets with one focus in mind, choosing whatever looks fresh and appetizing.

I love hakurei turnips and for the most part have simply been sautéing them in butter over the past couple of years upon the initial high recommendation of the farmer selling them. I hadn’t however, realized before reading an early summer post of Cheri at My Savory Spoon that the attached greens were very tasty eating too. So you can lop off the hakurei turnip greens and add them to this mix, or you can set them aside for later adding them into a pot of soup, a stir fry, or even in combination with the Swiss chard greens.

This recipe uses the bekana greens. Above are the bekana greens which like the hakurei turnips have a Japanese origination inspiring the combined Orange Sesame Dressing. They’ve a rather earthy flavor in their initial cooking and mellow tenderly in the cooking process. If you happen upon these bright fresh greens on your next Farmer’s Market jaunt they are well worth a try. Otherwise, you can create this similar veg dish similar as many folks do at the weekly seasonal Farmer’s Market, use whatever provides the best pickings of the day. 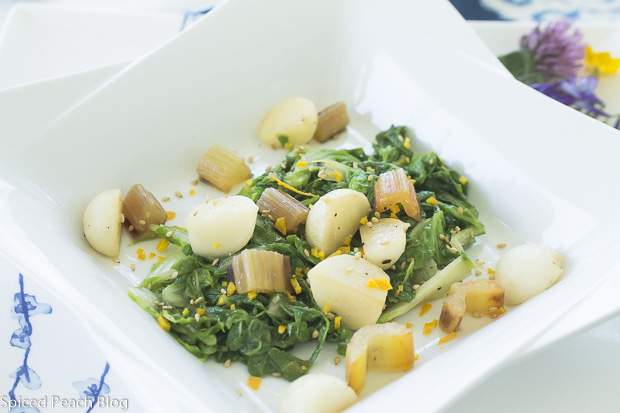